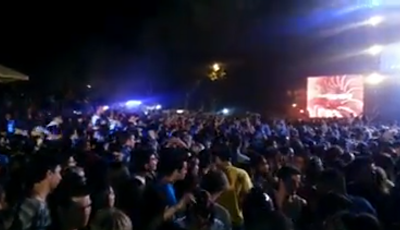 02:00am Sometime in 2012.
I have just driven past amber at the first set of pelican lights in a deserted St Anne’s Street Floriana only to get halted near the APS branch by a group of police who issued a fine for driving past “the red lights”. Given no chance to argue, I had to write one or two letters to concerned departments so that the fine got dismissed a few months later.

01:00am Tonight.
I have just been lucky enough to drive back home into Valletta through Floriana following a night out at the movies. It took me forty minutes to complete the hefty journey… just imagine a fictitious paramedic trying to reach out to an incident scene at lower Valletta. Forget it! During this time I had the chance to listen to the new album of Italian band “Ministri” and ironically also witness the collapse of street laws in front of the eyes of Police. Isle of MTV had just finished and it was a free for all situation. Leading the deliberate bad practice were Arriva busses who, rather than driving within their dedicated bus lanes they took in the middle lane and one after the other ignored a driver, probably a Floriana resident, who indicated an attempt to turn left to Sarria area. One specific ‘sardines’ car which I happened to be following, was home to, let’s say, six guys. Each time their engine was turning off because of the overweight, they smiled at the nearest drivers and police like all is well and good. Drivers opting last second for a ninety-degrees turn into one road they were otherwise missing, were patrolled calmly and given no warnings. Police also missed out on the tens of people sitting, standing and eating on the Vilhena lion fountain much to the enjoyment of the Local Council’s budgets i would guess!

And what about the tonnes of food and drink containers littered all over St Anne and adjacent streets? What about large groups of foreign students taking memorial pictures in the middle of St Anne Street to the detriment of traffic flow and their own safety? Also, is it ok for people to walk partly naked at 1am in Floriana, or to drive with their passenger sitting on the side window? And parking on pedestrian sidewalks and on double yellow lines? I don’t know! I’m probably missing out on various other misconducts tonight but I’m pretty tired now and I think you’ve got the gist.

Don’t get me wrong. This is not a complaint about the event, to which I’m all in favour. This is criticism towards the Police and the authorities above them, obliging to such blatant irregularities. The law is there and should indeed be respected anytime, yet, it should also be given its due respect by Police officers anytime as well. How could we, as a society, nurture an educated culture, when the authorities themselves disregard flagrant misconducts? Why would we need law that caters for public order and welfare, if this does not achieve its practical goals during mass events? Wouldn’t the authorities be ridiculing the law and its direct beneficiaries if they access it only when it’s a three to one or ten to one demonstration of power?