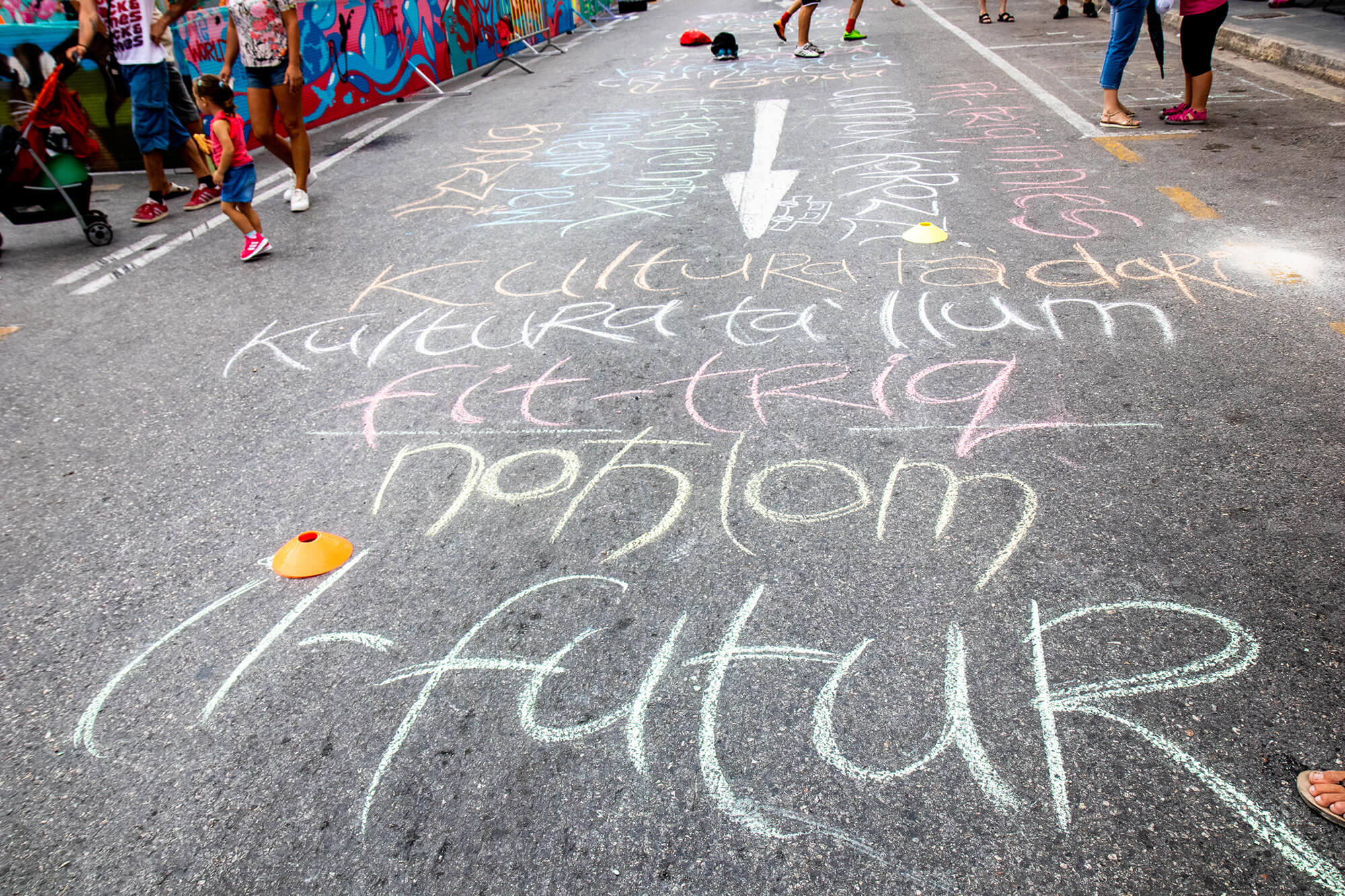 MOVE, a Maltese NGO member of ISCA which works within culture and physical education, invited me to participate in the Open Streets Day 2019 events organised in the main square of Żejtun.

Whilst streets were closed for cars and made accessible to pedestrians and cyclists, I was requested to decorate the main street with a written poem in Maltese language. The installation was executed in a freehand technique using coloured chalk. 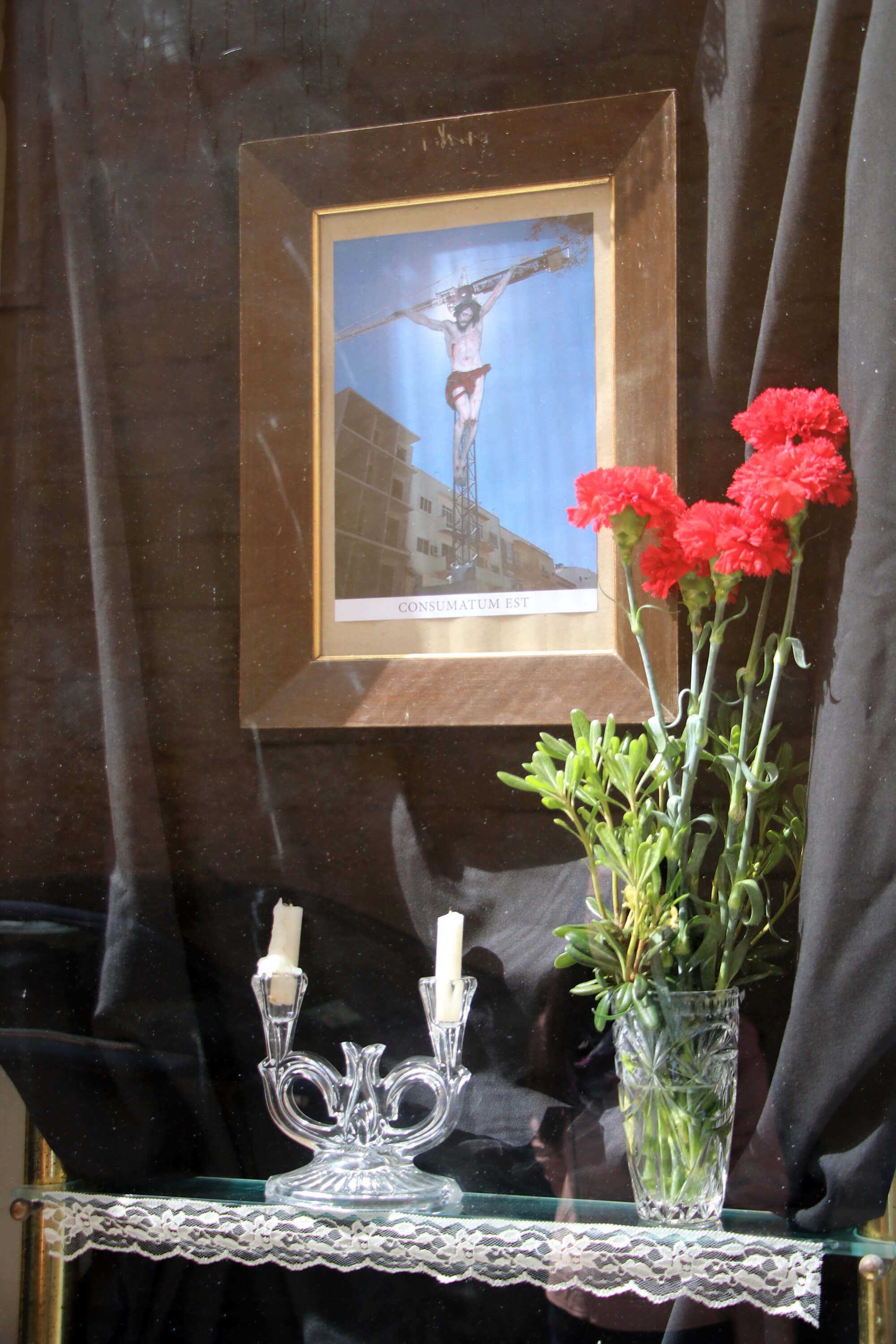 A majority of the Maltese population is still very adamant about the Catholic religion and its traditions. Maundy Thursday and Good Friday are two days during which many people travel to Valletta to watch, participate or feel part of the various rituals that take place. Many people join in the prayers, visit themed exhibitions or collect holy pictures whilst participants in Biblical costumes, brass bands and others carrying statues representing the various stages of the passion of Christ, make their way past the crowds.

Consumatum Est was an installation of a digitally manipulated holy picture representing the dead Christ nailed to a crucifix-shaped tower crane. Tower cranes have populated Maltese landscapes and invaded skyscapes in the past years and protestors consider them as the symbol of destruction. The framed picture was set in a window display of a local grocery shop in Archbishop Street in Valletta. Set up in the morning of Thursday 18 April 2019, it allowed for passers by to stop and have a look at what seemed to be another holy picture.

The consumption of our environment, the exhaustion of our resources and the despicable abuse of our land have been going on for long leaving the country and the quality of life “nailed to death”.

A big word of appreciation goes to Spanish sculptor Juan Bautista who allowed for the picture of his sculpture to be reinterpreted for this cause, Sunny Psaila who allowed for the installation to occupy his shop window and photographer Carl Farrugia who’s been kind enough to immortalise the setup through his lenses. 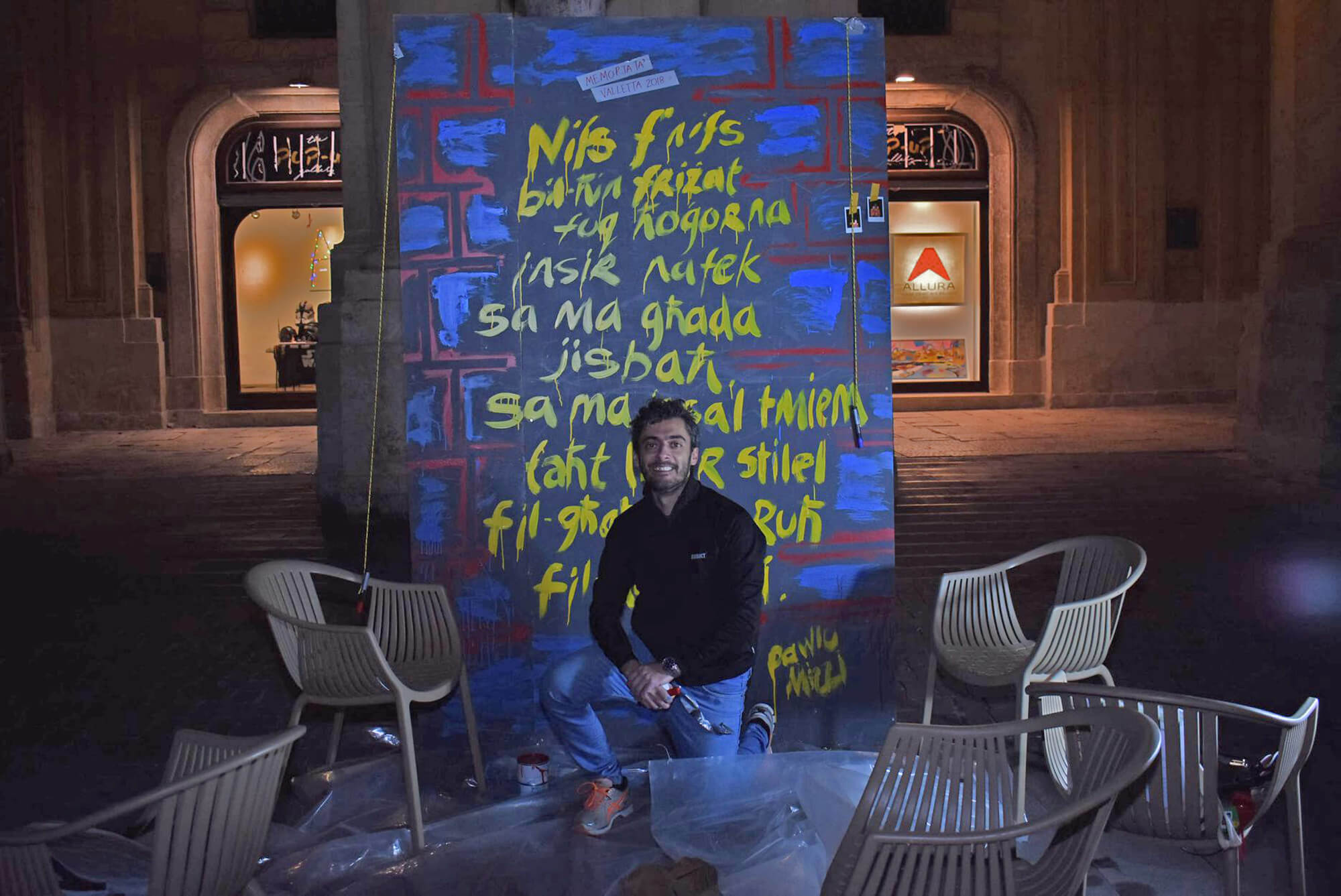 This wall became space for interaction during ‘L-Aħħar Festa’, Valletta 2018’s celebrations held on December 15, 2018, marking the end of the local European Capital of Culture year.

Despite the very bad weather that hit Valletta during the day, people were invited to complete the painting by leaving a mark on the “wall”. This was possible through painting or by attaching thoughts on sticky notes and polaroid selfies. Photos were meant to cover the whole wall representing a city life that is made of constant human interventions and relations.

The poem in Maltese language speaks about an intimate moment experienced at the city. Whilst there is clear reference to a physical contact between two persons, the poem stands as a metaphor of the artist’s love towards his hometown. 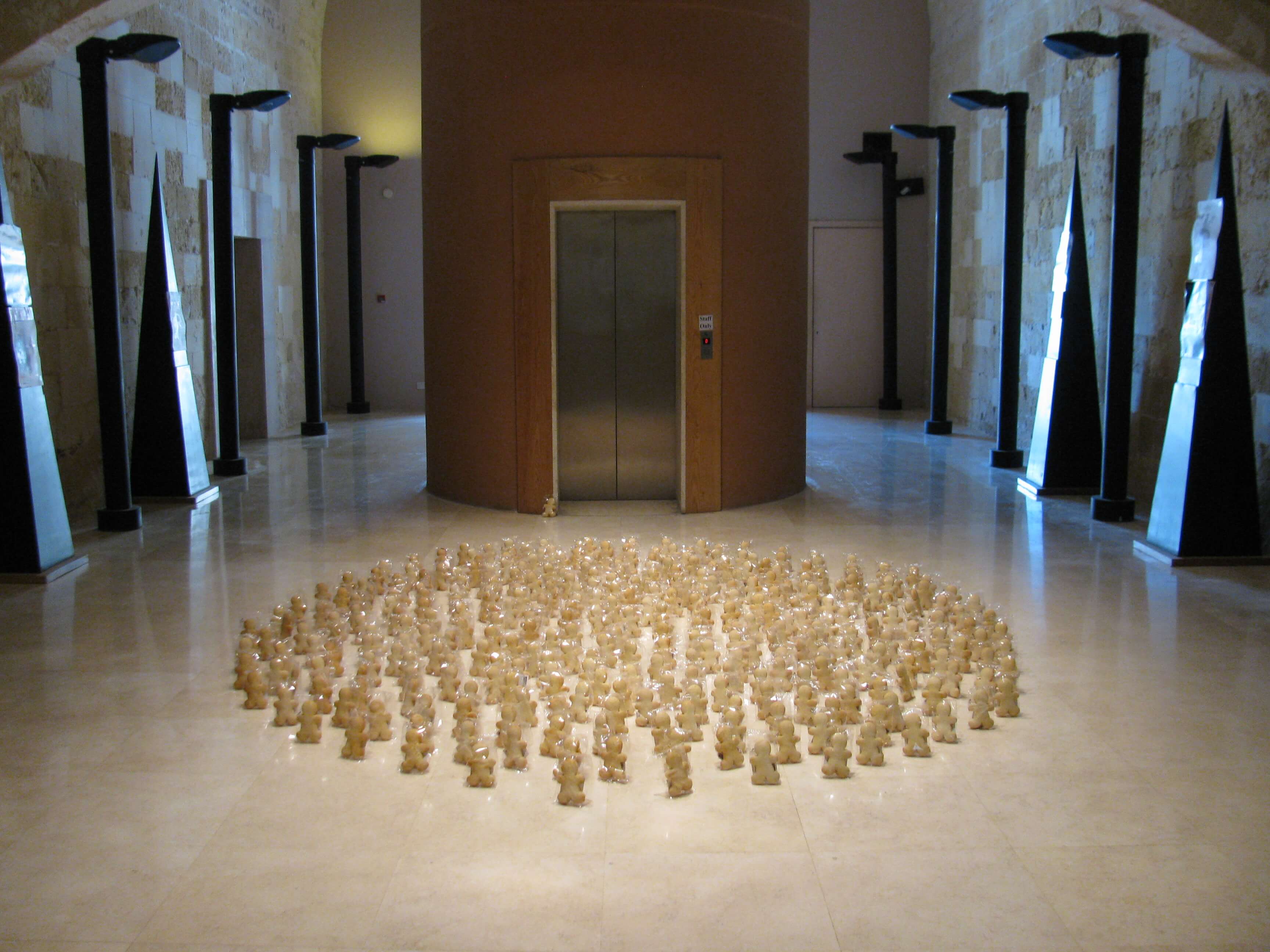 The Gingerbread Men was an activist occupation of St James Cavalier. An artistic choreography of assembly through social media. The Gingerbread Men, expected to be inanimate, as dictated by the ingredients, have finally overcome personal boundaries and become active. People joined the movement or retreated. Each gingerbread man guided the audience in consuming this medium and react on the online Occupy network, turning the audience into the main protagonist of this artistic choreography. 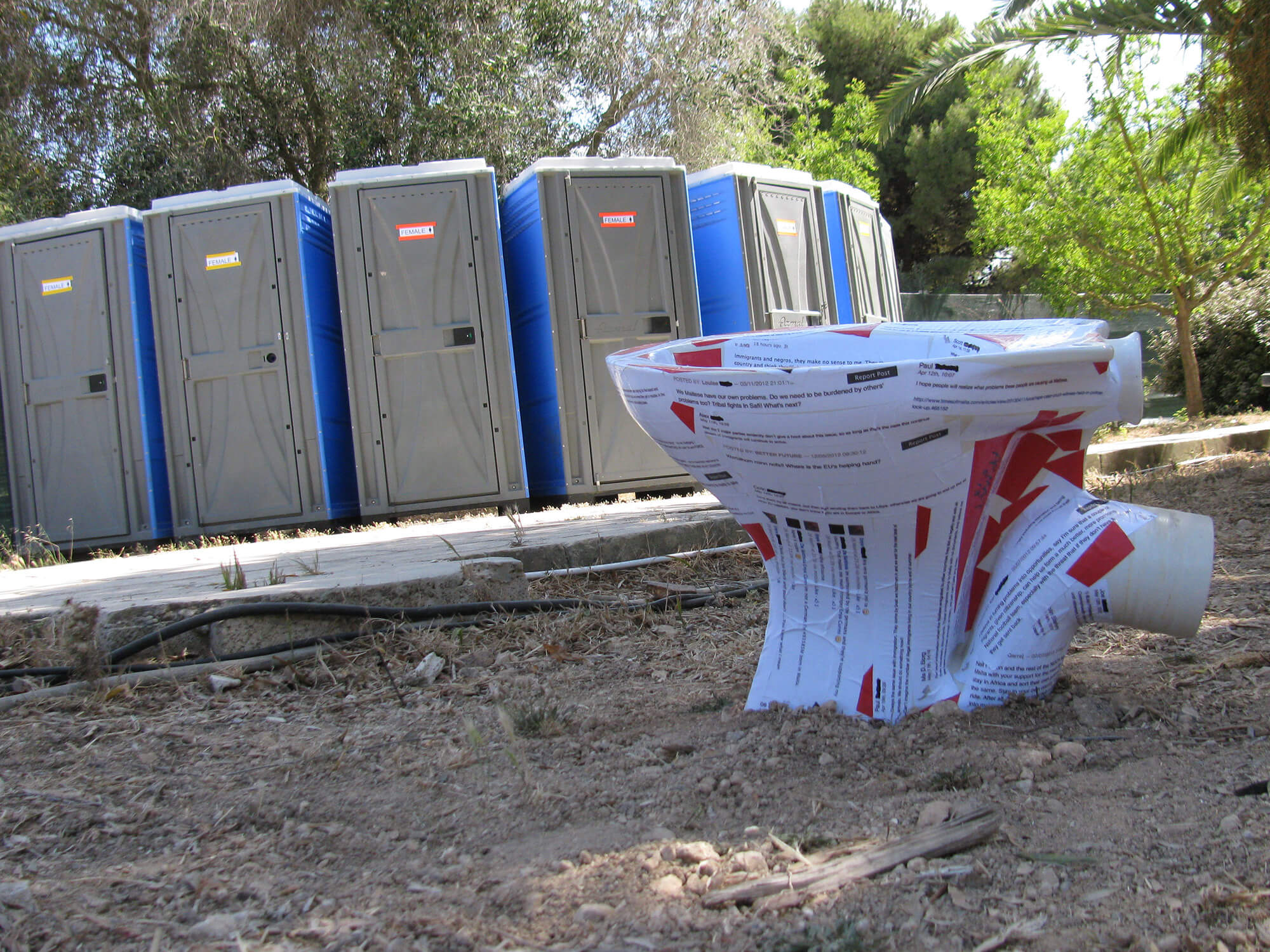 Il-Qasma Soċjali shed light on the extremist attitude of some Maltese towards immigration from North African countries into Malta. A ceramic toilet was decorated with various colourful hatred comments posted on Facebook by various Maltese users. Inspired by Marcel Duchamp’s sarcasm in “Fountain”, the concept was re-appropriated into Maltese contemporary politics.

Il-Qasma Soċjali translates into The Social Divide, yet it refers to the use of the word Qasma in vulgar Maltese which refers to a bowel incontinence and a sudden urge to poo. The artwork was signed off as ARMAT with reference to Duchamp’s “R.Mutt” signing off for “Fountain”. Whilst sounding the same, ARMAT in the Maltese language stands for “equipped”. In colloquial contexts, it refers to someone being equipped with some dangerous defensive tools.

Qasma Soċjali made part of a collective effort by artists Darren Tanti, Chris Castillo, Keith Bonnici and Pawlu Mizzi under the pseudonym Nagħaġ (Sheep) for the 2013 Earth Garden Festival. 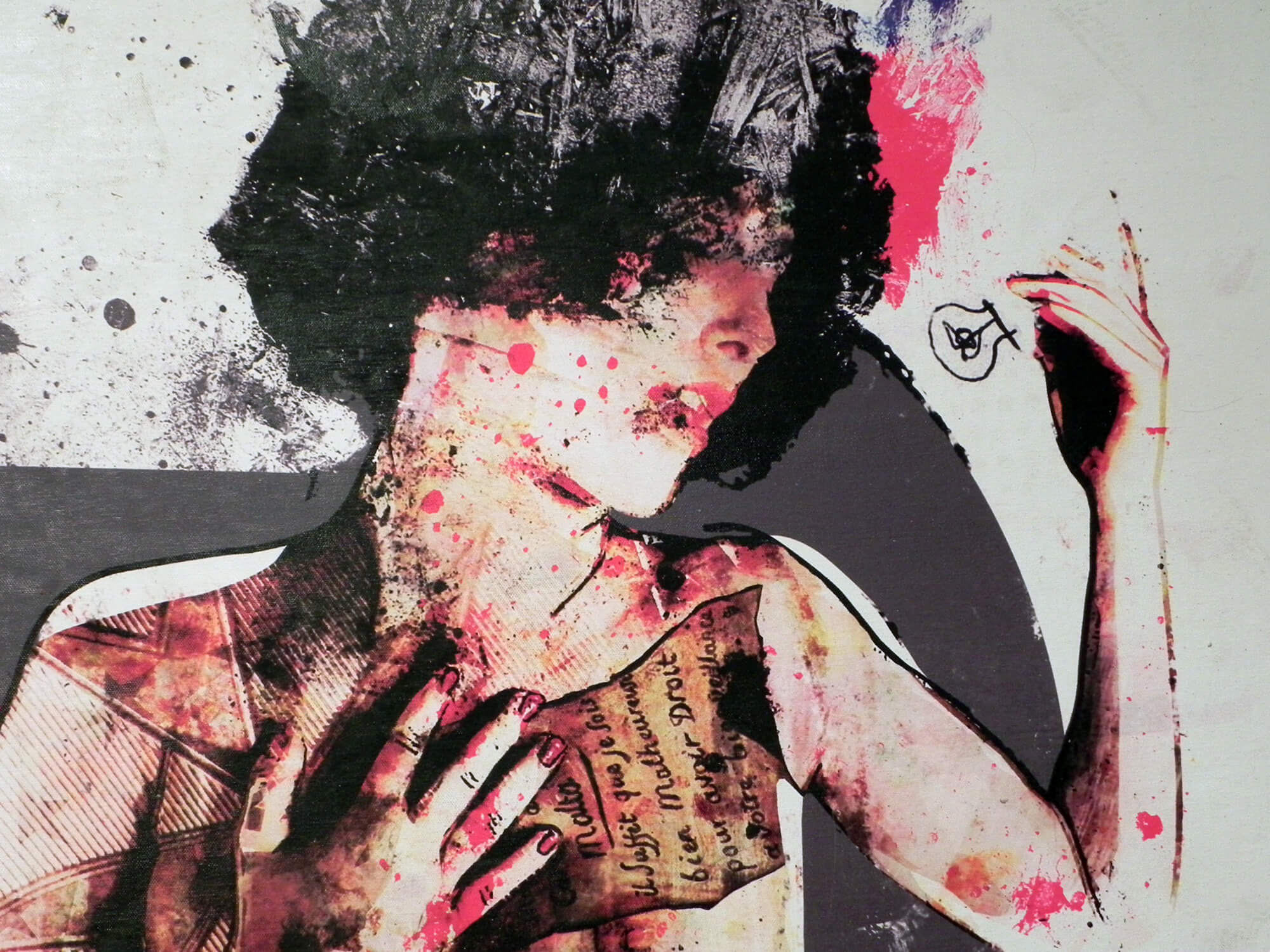